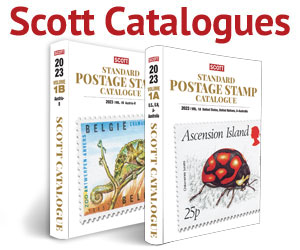 Shop for Stamp Album Supplements by Country and Series from Scott, Minkus, Schaubek and H.E. Harris! 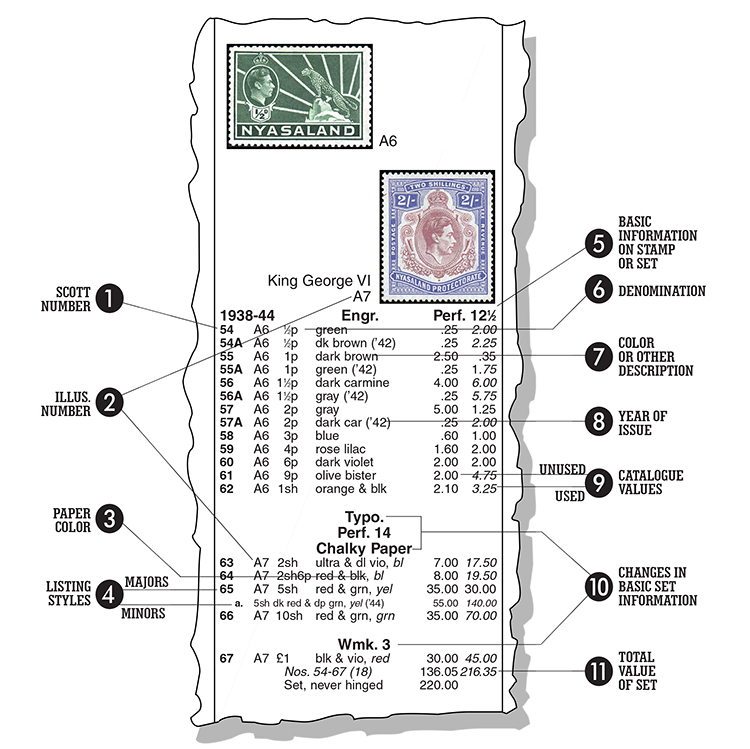 Scott catalogue numbers are used to identify specific items when buying, selling or trading stamps. Each listed postage stamp from every country has a unique Scott catalogue number. Therefore, Germany Scott 99, for example, can only refer to a single stamp. Although the Scott catalogue usually lists stamps in chronological order by date of issue, there are exceptions. When a country has issued a set of stamps over a period of time, those stamps within the set are kept together without regard to date of issue. This follows the normal collecting approach of keeping stamps in their natural sets. When a country issues a set of stamps over a period of time, a group of consecutive catalogue numbers is reserved for the stamps in that set, as issued. If that group of numbers proves to be too few, capital-letter suffixes, such as “A” or “B,” may be added to existing numbers to create enough catalogue numbers to cover all items in the set. A capital-letter suffix indicates a major Scott catalogue number listing. Scott generally uses a suffix letter only once. Therefore, a catalogue number listing with a capital-letter suffix will seldom be found with the same letter (lower case) used as a minor-letter listing. If there is a Scott 16A in a set, for example, there will seldom be a Scott 16a. However, a minor letter “a” listing may be added to a major number containing an “A” suffix (Scott 16Aa, for example). Suffix letters are cumulative. A minor “b” variety of Scott 16A would be Scott 16Ab, not Scott 16b. There are times when a reserved block of Scott catalogue numbers is too large for a set, leaving some numbers unused. Such gaps in the numbering sequence also occur when the catalogue editors move an item’s listing elsewhere or have removed it entirely from the catalogue. Scott does not attempt to account for every possible number, but rather attempts to assure that each stamp is assigned its own number. Scott numbers designating regular postage normally are only numerals. Scott numbers for other types of stamps, such as air post, semi-postal, postal tax, postage due, occupation and others have a prefix consisting of one or more capital letters or a combination of numerals and capital letters.

Illustration or design-type numbers are used to identify each catalogue illustration. For most sets, the lowest face-value stamp is shown. It then serves as an example of the basic design approach for other stamps not illustrated. Where more than one stamp use the same illustration number, but have differences in design, the design paragraph or the description line clearly indicates the design on each stamp not illustrated. Where there are both vertical and horizontal designs in a set, a single illustration may be used, with the exceptions noted in the design paragraph or description line. When an illustration is followed by a lower case letter in parentheses, such as “A2(b),” the trailing letter indicates which overprint or surcharge illustration applies. Illustrations normally are 70 percent of the original size of the stamp. Oversized stamps, blocks and souvenir sheets are reduced even more. Overprints and surcharges are shown at 100 percent of their original size if shown alone, but are 70 percent of original size if shown on stamps. In some cases, the illustration will be placed above the set, between listings or omitted completely. Overprint and surcharge illustrations are not placed in this catalogue for purposes of expertizing stamps.

The color of a stamp’s paper is noted in italic type when the paper used is not white.

There are two principal types of catalogue listings: major and minor. Major listings are in a larger type style than minor listings. The catalogue number is a numeral that can be found with or without a capital-letter suffix, and with or without a prefix. Minor listings are in a smaller type style and have a small-letter suffix or (if the listing immediately follows that of the major number) may show only the letter. These listings identify a variety of the major item. Examples include perforation and shade differences, multiples (some souvenir sheets, booklet panes and se-tenant combinations), and singles of multiples. Examples of major number listings include 16, 28A, B97, C13A,.

(5) Basic Information About a Stamp or Set

Introducing each stamp issue is a small section (usually a line listing) of basic information about a stamp or set. This section normally includes the date of issue, method of printing, perforation, watermark and, sometimes, some additional information of note. Printing method, perforation and watermark apply to the following sets until a change is noted. Stamps created by overprinting or surcharging previous issues are assumed to have the same perforation, watermark, printing method and other production characteristics as the original. Dates of issue are as precise as Scott is able to confirm and often reflect the dates on first-day covers, rather than the actual date of release

This normally refers to the face value of the stamp; that is, the cost of the unused stamp at the post office at the time of issue. When a denomination is shown in parentheses, it does not appear on the stamp. This includes the non-denominated stamps of the United States, Brazil and Great Britain, for example.

(7) Color or Other Description

This area provides information to solidify identification of a stamp. In many recent cases, a description of the stamp design appears in this space, rather than a listing of colors.

In stamp sets that have been released in a period that spans more than a year, the number shown in parentheses is the year that stamp first appeared. Stamps without a date appeared during the first year of the issue. Dates are not always given for minor varieties.

The Scott catalogue values are based on stamps that are in a grade of Very Fine unless stated otherwise. Unused values refer to items that have not seen postal, revenue or any other duty for which they were intended. Pre-1900 unused stamps that were issued with gum must have at least most of their original gum. Later issues are assumed to have full original gum. From breakpoints specified in most countries’ listings, stamps are valued as never hinged. Stamps issued without gum are noted. Modern issues with PVA or other synthetic adhesives may appear ungummed. Unused self-adhesive stamps are valued as appearing undisturbed on their original backing paper. Values for used self-adhesive stamps are for examples either on piece or off piece. For a more detailed explanation of these values, please see the “Catalogue Value,” “Condition” and “Understanding Valuing Notations” sections elsewhere in this introduction. In some cases, where used stamps are more valuable than unused stamps, the value is for an example with a contemporaneous cancel, rather than a modern cancel or a smudge or other unclear marking. For those stamps that were released for postal and fiscal purposes, the used value represents a postally used stamp. Stamps with revenue cancels generally sell for less. Stamps separated from a complete se-tenant multiple usually will be worth less than a pro-rated portion of the se-tenant multiple, and stamps lacking the attached labels that are noted in the listings will be worth less than the values shown.

Bold type is used to show any changes in the basic data given for a set of stamps. These basic data categories include perforation gauge measurement, paper type, printing method and watermark.