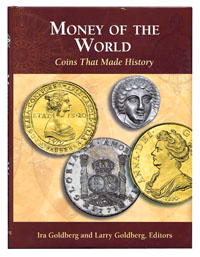 MONEY OF THE WORLD: COINS THAT MADE HISTORY

Fascinating account of how coins were shaped by the development of Western Civilization and how they sometimes helped shape it in turn. Traces the history of worldwide coins from Ancient Greece to until the end of the 19th century. Each magnificent coin is featured in both actual size and full color enlargement. Learn how coins helped emerging countries spread their wealth and influence. Ira and Larry Goldberg have gathered six of the best numismatic historians to tell the story of Western Civilization, as seen through some of the greatest coins in the world.